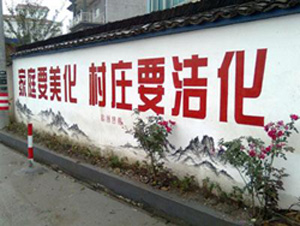 Today, many of the city formed a unique style of his own, quiet Hangzhou, Shanghai's downtown. But in these beautiful shell there are not so many beautiful things, on streets, walls, poles, small ads everywhere, some not so beautiful graffiti, and before the recount of monuments, are on destroy a beautiful thing, but also make the streets do things in a headache, but can not be changed.
With the pace of our tight 3M Company has developed the glass beads to solve this difficult problem. So humble little beads but plays such a big role, if necessary, add glass beads discretionary component, making the water transparent anti-graffiti coating as underground tunnels, anti-painted block walls and other areas to protect the paint of choice, of course, it was not just this energy efficiency. Anti-graffiti paint not only for walls, ceilings, pipes and street lighting to provide protection, but also can prevent the sidewalk in residential communities due to the inevitable friction marks the daily flow generated.
Currently, the market application of anti-graffiti coatings market has become increasingly widespread. It is not only used in the military, but also gradually into the homes of ordinary people. Suitable coating surfaces include slate, brick, tile, wood, glass, metal or the like. Especially in some of the higher requirements against scratching areas, such as large office buildings, schools, hospitals and other places of the hall, elevators, corridors, staircases and other local applications.
Glass beads since developed, has been playing its unique role as the developer of that we also widen the road, keeping pace with the times.
Previous: Protection of cultural relics
Next: Brief of anticorrosive materials