Y-90 glass bubble on the application in medical 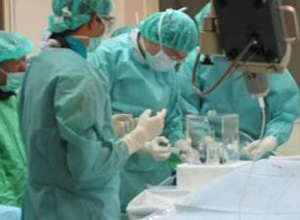 Liver cancer is a malignant tumor, the use of chemotherapy and radiation therapy are not satisfied with the results. Taipei Veterans General Hospital cancer have the new law, after 41 patient radioactive substance injected into the Y-90 glass bubble, of which about 90% in six months or longer to ease conditions worsen, this body radiotherapy for patients to bring a ray of hope.
Taipei Veterans General Hospital physician Li Runchuan radiation Department said today that the body radiotherapy using Y-90 glass bubble, and every single microsphere diameter of only 1/3 of the hair, by the medical staff through angiography accurate positioning of the number millions of stars within microspheres injected into the arteries near the cancer lesion, the next two weeks, the microspheres can be close to the average of 0.25 cm, radiation emit high levels of β, kill cancer cells.
Li Runchuan about cases pointed out, there was a male aged 65 liver cancer patients over the past three years, has surgery, hepatic artery embolization therapy two times, still can not stop cancer recurrence, a year ago injection Y-90 glass bubble, 6 pieces of liver cancer six weeks after narrow, continue to track up to three months, only two less than 1 cm of liver cancer, liver cancer disappeared after six months, there has been no recurrence, the patient felt no obvious body radiation therapy side effects or uncomfortable feeling.
In addition there is a 69-year-old women with colorectal cancer metastasis to the liver, cut off the right side of the large intestine after surgery, six months ago to deal with the remnants of the body radiation therapy of cancer, six weeks later, four malignant tumors was significantly reduced, and necrosis, and later liver left lobe of the new long a malignant tumor, use thermal radiofrequency treatment, and did not present any recurrence of tumor necrosis.
There is a 63-year-old women with ovarian cancer metastasis to the liver and pelvis after failure of chemotherapy, twice injected Y-90 glass bubble, until the volume is reduced and the reduced number of cancer two after surgery surgery to remove the current ongoing chemotherapy observation.
Li Runchuan representation, Y-90 glass bubble body radiation therapy to treat a variety of liver tumors, apply a wide range of cancers, chemotherapy patients are mostly repeatedly failed other treatments ineffective, but also because patients can not tolerate the side effects of chemotherapy or hepatic arterial embolization or unresectable or unwilling to surgery, so choose this treatment.
Taipei Veterans General Hospital currently has 41 patients received radiation therapy in vivo, including primary liver cancer, liver metastases of colorectal cancer, rectal adenocarcinoma class, neuroendocrine tumors, intrahepatic bile duct cancer, leiomyosarcoma, small intestine and thyroid cancer ovarian cancer, about 1/5 of the patients received 2 courses of cumulative experience in the treatment of 50 back.
Taipei Veterans General Hospital said all the patients in one and a half to two months after the track was found 90% of 5 patients with tumor reduction or controlled, nearly 2 percent of cancer patients significantly reduced, and in which two original inoperable liver cancer treatment available after surgery; be traced to 3-6 months later, nearly 9 percent of the patient's condition continued to be controlled or remained stable.
Previous: Glass bubble insulation coatings research
Next: Surface modification of glass bubble